You can get a good smartphone for under 10,000. Yes, it is true. If you are looking to buy a budget friendly smartphone with all the good features, you should definitely check out this list. We have listed down the 10 best smartphones under 10,000 which are a hit in 2021.

Poco M2 Reloaded is a solid choice of a smartphone under 10,000. It has a beautiful build and is available in two color options – Pitch Black and Slate Blue. The 6.53 inch touchscreen display and 1080×2340 pixels resolution along with various connectivity options like Wi-Fi, GPS, Bluetooth v5, Infrared, USB Type-C, FM radio, 3G and 4G makes it worth buying. The phone measures 163.30 x 77.00 x 9.10 and weighs 198 grams. It has a quad camera at the back which includes, 13 megapixel primary; an 8-megapixel camera; a 5-megapixel camera, and a 2-megapixel camera. The front camera is 8-megapixel. The image quality will not disappoint you at such a meagre price. It has 4 GB + 64 GB storage which is not at all bad for a smartphone under 5000.

This phone has been launched in two different variants both under 10,000. One has 3GB RAM + 32GB storage and is priced at 8,999 whereas the other offers 4GB RAM + 64GB RAM storage and costs 9,999. The phone is powered by the Qualcomm Snapdragon 450 processor and runs on One UI based on Android 10. Samsung has offered a triple rear camera in the Galaxy F02s which has a 13 megapixel primary camera, 2 megapixel camera and a 2 mp camera. The front is 5 mp which is suitable for a decent video call session or clicking selfies. The smartphone is available in three beautiful colour options, Diamond Black, Diamond Blue, and Diamond White. With such good specs, Samsung Galaxy F20s is a great option for a smartphone under 10,000.

This is a popular option for a smartphone under 10,000. It runs on Android 11 and is powered by Qualcomm Snapdragon 460 SoC. The quad rear camera setup, which includes a 48-megapixel primary camera, an 8-mp camera, 2-megapixel camera, and a 2-megapixel depth sensor. The selfie camera is 8-mp, which helps to click beautiful selfies. Moto G10 Power offers 6,000mAh battery and has a storage of 64GB which can be increased upto 1 TB. This mobile phone facilitates connectivity options such as 4G LTE, Wi-Fi, Bluetooth v5.0, GPS/ A-GPS, USB Type-C, and a 3.5mm headphone jack. It also has a fingerprint sensor which makes it an amazing option to consider if you are looking to buy a smartphone under 10,000.

With a 6.5 inch mini drop full screen and a resolution of 720×1,600 pixels, the Realme Narzo has a beautiful design and an even brilliant display. The smartphone is powered by the MediaTek Helio G85 gaming processor. It has a  6000mAh battery which can be charged with the help of an 18W fast charger. In addition to this, it supports reverse charging. The Realme Narzo 30A has a dual camera, the primary camera being 13MP while the secondary camera is supported by the monochrome sensor. The front camera is 8 megapixel which is good for taking selfies and video calling. Other features included in the camera are Super Night Mode, Chrome Boost, and Portrait Mode. It also offers fingerprint detection and supports three card slots.

Infinix Smart 5 is  a fantastic smartphone to buy under 10,000. It runs on Android 10, has a 6.82 inch HD + display, weighs 207 grams and supports Eye Care Mode. Its 2 GB RAM and 32 GB inbuilt storage can be increased to 256 GB via microSD card. The handset has a dual rear camera setup with 13 megapixel primary and low light sensor. The front camera meant for selfie and video calling is 8 megapixel. The 6000mAh battery makes it a powerful device. Smart features like fingerprint sensor, ambient light sensor, G-sensor, proximity sensor, gyroscope and e-compass adds so much worth to this smartphone available under 10,000.

Samsung smartphones are found in every house and they are easily loved. Talking particularly about the Samsung Galaxy M02s, it runs on Android 10 based Samsung One UI and has a Snapdragon 450 processor with Adreno 506 GPU for graphics. The 6.5-inch TFT display with a resolution of 720×1560 pixels is pretty good. It has a 5000mAh battery that supports a 15W quick charge. The phone supports 32/64 GB of storage with 3/4 GB of RAM. It also has an option of using a memory card which helps to increase the storage upto 1 TB. Apart from this, the connectivity options include 4G, Bluetooth, headphone jack and GPS. Samsung Galaxy M02s has a triple camera, main lens being 13 megapixels, the second lens is 2 megapixel depth sensor and the third being 2 megapixel macro. The smartphone is available in Black, Blue and Red colour. The front camera is 5 megapixel. Features like auto HDR, digital zoom etc. with the camera makes the phone an amazing choice for a smartphone under 10,000. This phone is available in Black, Blue and Red color. 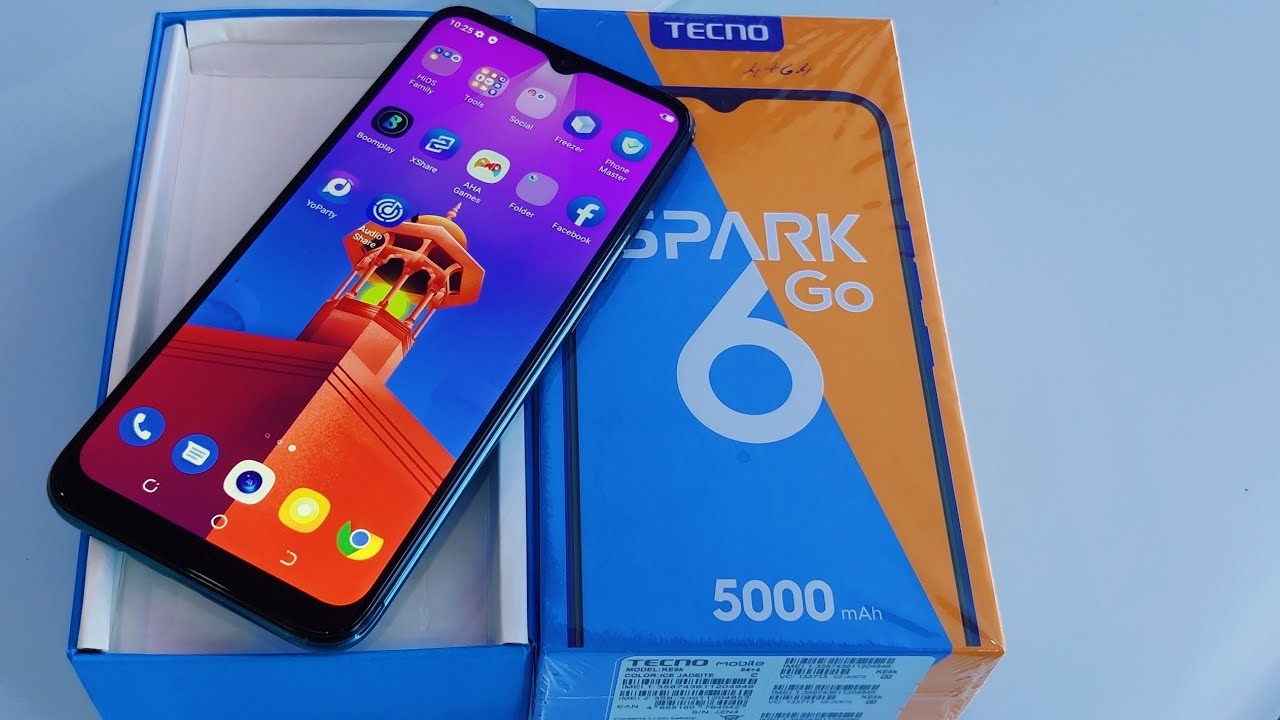 Techno Spark has been released in the market in very beautiful colors like Aqua Blue, Ice Jade and Mystery White Colour. This has given the smartphone a brilliant look and makes it difficult to resist. It runs on an Android 10 and has a MediaTek Helio A25 processor. The display aspect is also quite normal. It has a 6.52-inch HD Plus TFT display and weighs 193 grams. The phone has a 4 GB RAM and 64 GB of storage which is pretty decent. The connectivity options are similar to as present in other phones under the same range. Techno Spark 6 Go has a dual rear camera which is 13 megapixels and the other one is an AI lens, the front camera is 8 megapixel. It has a 5000mAh battery. The camera enthusiasts will find many good features like AI HDR, AI Beauty, Bokeh, Auto Scene Detection, etc. Above all, Techno Spark 6 Go is a pretty decent smartphone under 10,000.

This dual sim which runs on MIUI 11 with Android 10 and can be upgraded to MIUI 12 is one of the best smartphones under 10,000. The 5000mAh battery is supported by 10 watts charging which makes Xiaomi Redmi 9i powerful. The smartphone is equipped with Dual 4G VoLTE, Wi-Fi 802.11 b / g / n, Bluetooth 5, GPS, 3.5mm audio jack, FM radio and Micro USB for connectivity. The build and design of the smartphone are extraordinary. It measures 164.9 × 77.07 × 9 millimeters and weighs 194 grams. The P2i coating is splash proof. Redmi 9i offers 6.53 inch HD + display, a 2 GHz octa-core MediaTek Helio G25 processor. It has 64 GB and 128 GB inbuilt storage options with 4 GB RAM. The storage can be expanded up to 512 GB with the help of a microSD card. The Redmi 9i has a 13-megapixel rear camera with LED flash and a 5 megapixel front camera. The cherry on the top is that the phone supports face unlock which is a rare feature in a smartphone under 10,000.

The Infinix Hot 10 was launched in one variant only which runs on Android 10. Equipped with a 6.78 inch HD + IPS display and octa-core MediaTek Helio G70 processor, the smartphone is undoubtedly one of the popular choices for a smartphone under 10,000. It offers 6 GB RAM and 128 GB internal storage. You can increase the storage to 256 GB by using a micro-SD card. The smartphone has been blessed with a quad rear camera setup which is too much to ask for in a smartphone under 10,000. The quad camera consists of a 2 megapixel depth sensor with a 16 megapixel primary sensor, a 2 megapixel macro sensor and a low light sensor. The selfie camera is 8-megapixel. It has a 5200mAh battery, supported by 18 Watt fast charging and is capable of giving up to 31 hours of 4G talk-time.

It was launched in 2020. The phone runs on Android 10 and is powered by an octa-core MediaTek Helio G35 processor. It has a touchscreen display of 6.52 inch with a resolution of 720×1600 pixels. Micromax In 1b has a 5000mAh non-removable battery and supports fast charging. Micromax In 1b has a rear camera with autofocus which includes a 13-megapixel primary camera, and another 2-megapixel camera. The front camera is 8-megapixel. The phone packs 32GB of inbuilt storage that can be expanded upto 128 GB via microSD card. It is a dual sim phone and is a very useful smartphone under 10,000 available in Blue, Green, and Purple colours.

A lot of options for a smartphone under 10,00 are available in the market. But we have eased your research work by listing down the best options. I hope this blog helps you choose the best among the best.

LG adds mic and speakers to its face masks

The new Fossil Hybrid HR strikes a unique blend of